We would like to thank everyone who participated and was otherwise involved in the very successful Taikai in Michigan, USA hosted by Joseph Stricker Shihan on August 1-3, 2014 at the Hakkoryu Senshinkan Dojo in Bay City. We enjoyed over 50 participants from North America and abroad and entertained over 100 guests at the celebratory dinner afterwards, which included some of Saginaw and Bay City’s Government Representatives, members of the Board of Directors of The Japanese Cultural Center of Saginaw, and many family members and friends.

From the moment this event was announced, the response was overwhelming. It is inspiring to see so many people gather from so many different places to practice Hakkoryu Jujutsu and Koho Shiatsu Igaku for these three long days. Nidai Soke Okuyama was extremely pleased not only with the number of attendees but also the obvious dedication each and every participant displayed during the course of the event. Because he deeply appreciates this kind of dedication to Hakkoryu, he promises to continue his visits to North America for as many years as he is able, with his son following in his footsteps.

More events like this are already being planned in North America and Japan, so please watch for more announcements to come!

Though we had to say goodbye to many new friends after the long weekend, many remain here for the duration of the closed-door training in Koho Shiatsu Igaku and Shihan, Kaiden and Sandaikichu “Jikiden” (direct transmission from the Soke) over some long days through August 10. This year, eleven people are receiving Shiatsu certification, four people receiving Menkyo Shihan licensing, four receiving Menkyo Kaiden licensing as well as the final and perhaps the most significant part of Hakkoryu’s curriculum, the Sandaikichu teachings.

Once a pupil has been recommended by their teacher (a person already holding the Menkyo Shihan license or above), he or she signs the official roster (emeiroku) sealing their new promise and commitment to Hakkoryu. They then receive direct instruction from Nidai Soke Okuyama on the new and deeper techniques and philosophy of the school. In this way, the transmission is direct from headmaster to pupil. 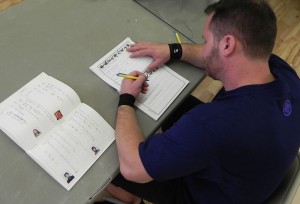 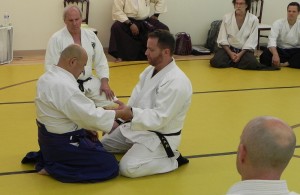 This week our new Shihan-in-training not only receive instruction from the headmaster, but also from several others who have received the licensing before and who have traveled to Michigan from such faraway places as Oregon, California and Texas USA to participate in the teachings and welcoming of these new licensed instructors of Hakkoryu Jujutsu. It’s not only a chance for everyone to help the new Shihan candidates, but also for them to help each other while learning once again from the head of the school, Nidai Soke Okuyama. This is how teachings are preserved and passed on from one generation to the next, while maintaining strict quality control not often seen in other schools. This training demands much of the pupil. Not just in the sense of the physically exhaustive training, but it also requires one’s efforts in cultivating a new mindset; a new outlook.