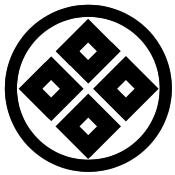 The Okuyama family are descendants of the famous Genji clan (also called Minamoto). The clan was popularized in a famous Heian period romance Genji Monogatari, written by Murasaki Shikibu.

Most prominent of the Genji clan was Minamoto Yoritomo, a renowned general during the Kamakura period. During this era, the two most powerful clans were the Genji and their enemies, the Taira (also Heiko). The Taira were defeated in a fierce sea battle during the Genpei war and Minamoto Yoritomo and his descendants reigned supreme in Japan for some time.

The type of mon (crest) used in Hakkoryu was used by a retainer of the Minamoto clan and is commonly known as Meyui, after the concept of tie-dying (see Vol. VIII, No. 4). The particular style of the Hakkoryu mon is commonly known as Yotsume (“four eyes”). The significance of the crest is related primarily to the ancestors of the Okuyama family. However, the geometric design of eight squares related directly to the number eight of Hakkoryu* and the four eyes denotes preparedness for attack from all directions. There is also a superstition attached to Yotsume, as the “four eyes” guard against evil. This idea has been extended to include personal protection as in the case of Hakkoryu.

At one time, the traditional Japanese mon were the sole property of the Bushi. After the end of the Tokugawa era, they were adopted by many people. Famous Japanese companies (i.e. Mitsubishi, Hitachi, etc.) have bought the legal right to certain crests as official trademarks; others have been used by banks and department stores. Still others are common on shops and restaurants. The Yotsume appears on many of the smaller shops in Tokyo and is not unique to the Okuyama family or Hakkoryu.

* The eighth light, appearing weak in composition, is surprisingly powerful. Additionally, the number “8” is the symbol of infinity, reliance of physical strength and the use of Hara.