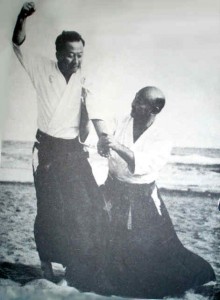 “The three major characteristics of Hakkoryu are: no challenge, no resistance, no injury. With Hakkoryu – for the first time – the eyes of the dragon are drawn.”
Ryuho Okuyama

Nestled along a back street in a town one hour North-West of Tokyo by train is a dojo unique in modern Japan. It is called the Hakko-Ryu Juku Hombu (Private headquarters of the Eighth Light System), and was founded 40 years ago by Ryuho Okuyama, now a spry 73- year- old man who still actively teaches the instructors of his system. Together with his son, Toshio Okuyama, he directs all Japanese dojo as well as branch organizations in more than a dozen countries. 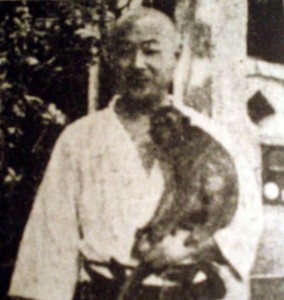 Ryuho Okuyama poses near the Hakkoryu Hombu, holding a pet monkey in his arms.

Okuyama, Sr., born in 1908 in Yamagata Prefecture, traveled and studied martial ryu (systems) all over Japan and Okinawa. Included in his studies were Daitoryu Aikijujutsu which he studied under Sogaku Takeda, the founder of Hokkaido; Seigoryu, which he studied in Kyoto; Nitoryu and Hasegawakoryu (sword system), which he studied in Kumamoto; Sojutsu (spear combat) and Kyujutsu (archery), which he studied under a man named Zanto Taldaya Marubashi; Shurikenjutsu (throwing weapons) and Jojutsu (stick combat), which he learned in the mountains of Niigata; as well as other, lesser-known systems. At the same time, he studied under many of the leading masters of Oriental medicine, and was engaged for a time as a priest in the Mt. Haguro sect of Shugendo (a combination of Buddhism and Shintoism). Combining his martial, medical, and religious knowledge, he sought to develop a martial system that was effective, practical, and yet humanitarian. In 1941, he founded the Hakko-Ryu Juku Hombu, calling his system, Hakkoryu.

The name Hakkoryu is based on a philosophical view of the color spectrum, as being divided into nine bands of light. The eighth shade is ultraviolet, which is invisible to the naked eye but extremely powerful, as theoretically are Hakkoryu techniques. The number eight in traditional Japanese thought also symbolizes infinity. After truly mastering Hakkoryu principles, an infinite number of techniques can be created.

Little known, and often misunderstood outside Japan, Hakkoryu is a Jujutsu system that uses the body’s meridian system to create varying amounts of pain to control an attacker without causing serious injury. Japanese and traditional Oriental medicine teach that ki, which is the non-physical aspect of life, flows through keiraku (meridians) in the body. Certain tsubo (sensitive points) along the meridians are sensitive to touching or striking and cause sharp distracting pain, but don’t damage bones, joints, or body tissue. These are the focal points of Hakkoryu techniques, which the trained exponent uses to distract, dispatch, or arrest an attacker. Because of the non-injurious aspect of these techniques, Hakkoryu is said to be humanitarian in nature.

Okuyama’s Hakkoryu techniques allow him to control attackers with a minimum of injury. Here he defends himself against two attackers simultaneously, using Yondan Shibori.

For advanced training, Hakkoryu still uses the menkyo (licensing) system, long a part of traditional Bujutsu-ryu. Upon mastering the Shodangi through Yondangi kata, it is possible that one might be recommended and subsequently invited by Okuyama and his son to undergo advanced training as an Uchideshi (special apprentice). To take this training, a student must travel to the Hombu Dojo and live with the Okuyama family for a period of time. This training is in techniques, for the title of Shihan (master instructor), and is taught personally by the Okuyamas. During these training periods, Hombu Dojo is closed to all visitors but those ranked Shihan and above. It is during these sessions that the higi (hidden points) and okuden (secret teachings) of Hakkoryu are taught, giving finesse and personality to an exponent’s techniques.The primary means of instruction is through kata, in which the principles of Okuyama’s system are introduced. There are four basic kata; Shodangi (first degree), Nidangi (second degree), Sandangi (third degree), and Yondangi (fourth degree), which also correspond with the black belt level a trainee possesses. Each kata contains numerous waza (techniques) that must be mastered and thoroughly understood. Contained within these waza are the gensuoku (principles) which are the actual lessons of the techniques. The introduction of principles through waza follows a rational order where subsequent principles build onto previous ones, developing a cohesive whole. Once a student learns these principles, he is able to develop his own variations, using combinations or unique applications of principles in a potentially infinite number of circumstances. This allows the trainee to create techniques and applications suited to his own needs, rather than blindly imitating the techniques taught by instructors.

Hakkoryu techniques are based on a sophisticated knowledge of anatomy. The attacker grabs the defender’s left shoulder and prepares to punch, but is distracted by a metsubushi striking technique to the meridians of the face. The defender then grasps his wrist, applying considerable pain but no lasting injury, and applies pressure to force the attacker face-downward for the arrest.

The Shodan through Yondan training is the forging and tempering process that gives body and strength to a blade. The Higi and Okuden of advanced training are the sharpening and polishing process that endows a blade with the razor edge and mystical elegance of this most prized weapon. Should an apprentice complete this training, he is given the makimono (hand scroll) for Shihan, the Hombu certificate of Shihan training, and the menkyo (teaching license); and he is then awarded a purple belt, the color of royalty and honor in Japan. 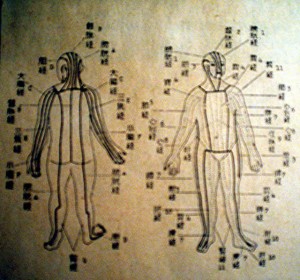 Knowledge of the body’s meridian system is a key component of advanced Hakkoryu training.

Along with Hakkoryu, Okuyama has founded his own method of traditional medical therapy called Koho Igaku Shiatsu (Imperial finger-pressure therapy). Using the same meridians incorporated in Hakkoryu to control an attacker, Koho Shiatsu uses these to defend against attacks of disease and sickness. Varying degrees of pressure on meridians applied by a trained practitioner can balance irregular and incorrect accumulations of deficiencies of ki in a patient. All Shihan (and above) practitioners of Hakkoryu undergo some training in Koho Shiatsu, as this is also an important aspect of understanding the results of the art’s other, more strictly martial techniques. The Okuyama family runs two of its own private shiatsu clinics, where patients can come for treatment. One is at the Hombu Dojo itself, the other is in Tokyo. Okuyama also conducts extensive clinical training for practitioners in which he grants instructors, masters, and doctorate certificates. He is widely sought out for his unusual methods and often is invited to lecture in various parts of Japan on his system of therapy.

Most Hakkoryu classes are taught individually or in small groups, as this allows the instructor to make immediate comment or correction on a student’s technique. In this manner, a student can learn rapidly and can better come to understand the subtleties of techniques. This is the traditional master-to-student relationship characteristic of Bujutsu systems like Hakkoryu. It guarantees a high quality of excellence in the trainee, but also limits the number of students an instructor can comfortably teach.

Consistent throughout Hakkoryu training is the concept of abandoning force. Muscular strength is not required in Hakkoryu, as the techniques rely mainly on an understanding of human anatomy and physiology. A student is encouraged always to relax both his mind and body, so that his center of gravity settles in the proper spot (and thus body weight can be easily focused at various points during the execution of techniques). Should a trainee try to use strength alone, his body weight will not be focused properly, and techniques will be less effective. Once a student can grasp and unconsciously practice this concept, progress becomes rapid.

In these rare photos, Ryuho Okuyama demonstrates Sandan Mochi Maware against an attack to the throat.

Another reason the Hakkoryu student must learn to relax is that training sessions can sometimes be extremely painful, since they focus on the nervous system and meridians. Relaxing your mind and body diminishes this pain substantially. In extreme cases, where intense pain persists after complete relaxation, a trainee is taught to erase from consciousness the area of pain and focus on something else. This separation of thought from physical discomfort is called shinki (mind-energy), but has been taught for centuries in Japan, both by mystics and by masters of Bujutsu.

Unlike most popular systems of self-defense, Hakkoryu does not engage in any sports-like activities whatsoever. Sports pit one adversary or one group of adversaries against another to determine which has the best technique, which scores the most points, or who is the fastest or most powerful, and then gives the victor an award. The purpose of Hakkoryu is not to determine the relative merits between individuals, but rather to improve the individual’s knowledge, ability, and understanding of humanitarian self and public protection consistent with physical and mental health. Sports have no place in Hakkoryu.

Hakkoryu was not taught to foreigners for years, and was not introduced to the United States until fairly recently. The first authorization to teach Hakkoryu in the United States was given by Okuyama to James A. Benko in 1965. With Hombu Dojo’s permission, he started the Hakkoryu Jujutsu Federation based in Akron Ohio. Currently there are very few qualified instructors in North America, but with the dedication of current trainees, steady growth is expected over the coming years.