Joseph Miller was born in New York City, NY, USA in 1949. There he began studying karate at age 6, judo at age 9, and jujutsu at age 11 with Shihan Michael DePasquale Sr., receiving his first black belt at age 18 in Yoshitsune Jujutsu. It was Mr. DePasquale who wrote to Shodai Soke Okuyama, asking him to accept Joe Miller as a student at the Hakkoryu so-Hombu Dojo in Omiya, Japan.

Mr. Miller had enlisted in the U.S. Air Force and spent over 20 years in service to his country. 18 of those years were spent in Japan with Shodai Soke Okuyama and family. Mr. Miller achieved Menkyo Shihan at the age of 25 from Shodai Soke in June of 1973. By the time Shihan Miller reached the age of 38, he had received Menkyo Kaiden Sandaikichu Shihan as well as certification in Koho Shiatsu from Nidai Soke Okuyama. He is also one of a few who received a unique and unusual honor from Nidai Soke Okuyama, a certificate bestowing judan (10th level or grade) reserved for those who have demonstrated exemplary dedication and hard work over the years toward the support of Hakkoryu. 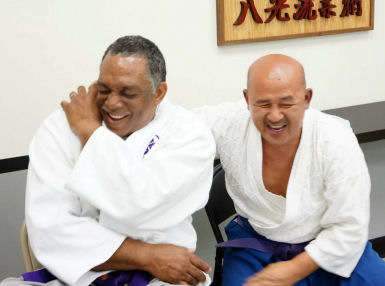